Exercise at middle age might results in bigger brains later on

Just in case you are behind on your exercise plans this following article may well be the wake up call you need as well.
A widely known fact is that exercise is good for your condition and will help to achieve or maintain the weight you want but now it appears it’s even more important than that.
So read on and discover how you should definitely consider getting back to exercising on a frequent basis: 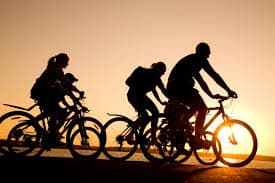 Poor physical fitness in middle age might be associated with a smaller brain size later on, according to a study published in an online issue of Neurology.

Brains shrink as people age, and the atrophy is related to cognitive decline and increased risk for dementia, a researcher said, and exercise reduces that deterioration and cognitive decline.

In this study, more than 1,500 people at an average age of 40 and without dementia or heart disease took a treadmill test. Twenty years later, they took another test, along with MRI brain scans. The study found those who didn’t perform as well on the treadmill test — a sign of poor fitness — had smaller brains 20 years later.

Their exercise capacity was measured using the length of time participants could exercise on the treadmill before their heart rate reached a certain level. Researchers measured heart rate and blood pressure responses to an early stage on the treadmill test, which provides a good picture for a person’s fitness level, according to the study author Nicole Spartano, a postdoctoral fellow at the Boston University School of Medicine.

Physical fitness is evolving as a significant factor related to cognitive health in older age. A study published in May 2015 found that higher levels of physical fitness in middle-aged adults were associated with larger brain volumes five years later.

This study shows that for people with heart disease, fitness might be particularly important for prevention of brain aging, Spartano said.

“We found that poor physical fitness in midlife was linked to more rapid brain aging two decades later,” she said. “This message may be especially important for people with heart disease or at risk for heart disease, in which we found an even stronger relationship between fitness and brain aging.”…

Seven Superfoods That Serve Up a Healthy Brain Boost

How Exercising Your Brain Can Stave Off Memory Loss

Get Plenty of These Foods for Increased Brain Function

Ridding Your Body of Memory-Stealing Toxins

Tips to Maintain a Healthy Brain

You Can Improve Your Mental Clarity as You Age

How to Achieve Better Brain Function