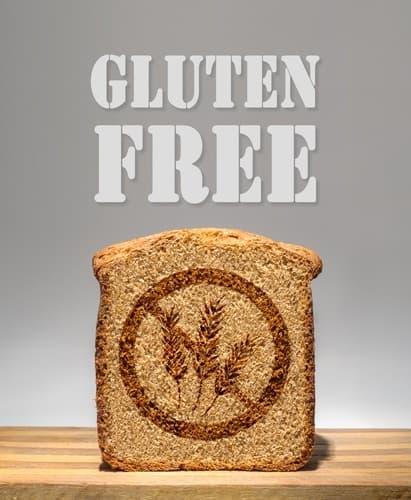 One of the hardest things about going gluten-free is giving up some of your favorite foods.  But there are often tasty substitutions to help you make the transition without feeling deprived.

Let’s take a look at some of the best substitutions for gluten-free favorites:

Sandwich Bread.  One of the hardest things to give up is a sandwich made on wheat bread.  But you can make some simple substitutions such as using corn tortillas or brown rice tortillas and make sandwich wraps.  There are also some gluten-free bread options, but you’ll definitely notice a difference in texture.

In addition, many people use lettuce wraps in lieu of bread.  These provide a crunchy texture without adding any harmful gluten.  You can also use cucumbers sliced lengthwise as a substitute for bread.  Rice cakes are also a favorite for delivering sandwich ingredients.

Breadcrumbs.  Many recipes call for breadcrumbs to help hold foods together such as meatloaf or meatballs.  Instead of traditional breadcrumbs, try adding gluten-free oats.  They’ll hold everything together without changing the flavor.

Croutons.  When you bite into a healthy salad, it’s always nice to have a little crunch.  But croutons are generally made with wheat.  Instead try adding crunchy bacon bits, toasted almonds, or toasted walnuts to your salad.

Pasta.  Pasta is one of life’s greatest pleasures and a quick ingredient for meals.  You can enjoy gluten-free pastas made from rice flour and you won’t be able to tell much of a difference.

You can also use spaghetti squash, zucchini, or eggplant sliced very thinly as a substitute for pasta that also helps you get in an extra serving or two of veggies.

Flour.  White all-purpose flour is made from wheat, so you’ll need to eliminate it from a gluten-free diet.  But you can now find many flour substitutes made from almonds and coconuts that provide you with the texture of flour for baking your favorite treats.  They won’t taste exactly the same, but can still be enjoyable.

If you typically use flour to thicken soups and stews, try switching to cornstarch instead for the same effect.

While giving up gluten does mean that you’ll be letting go of some old favorites, it doesn’t mean that you have to feel deprived.