For those who struggle with their weight which I guess must be about 6 out of 10 people , here’s a book you might want to read too:

David Ludwig often uses an analogy when he talks about weight loss: Human beings are not toaster ovens. If we were, then the types of calories we consumed would not matter, and calorie counting would be the most effective way to lose weight.

Dr. Ludwig, an obesity expert and professor of nutrition at the Harvard T.H. Chan School of Public Health, argues that weight gain begins when people eat the wrong types of food, which throws their hormones out of whack and sets off a cycle of cravings, hunger and bingeing. In his new book, “Always Hungry?,” he argues that the primary driver of obesity today is not an excess of calories per se, but an excess of high glycemic foods like sugar, refined grains and other processed carbohydrates. 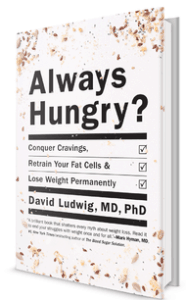 Recently, we caught up with Dr. Ludwig to talk about which foods act as “fertilizer for fat cells,” why he thinks the conventional wisdom on weight loss is all wrong, and long-term strategies for weight loss. Here are edited excerpts from our conversation.

Q. What is the basic message of your book?
A. The basic premise is that overeating doesn’t make you fat. The process of getting fat makes you overeat. It may sound radical, but there’s literally a century of science to support this point. Simply cutting back on calories as we’ve been told actually makes the situation worse. When we cut back on calories, our body responds by increasing hunger and slowing metabolism. It responds in an effort to save calories. And that makes weight loss progressively more and more difficult on a standard low calorie diet. It creates a battle between mind and metabolism that we’re doomed to lose.

Q. But we’ve all been told that obesity is caused by eating too much. Is that not the case?
A. We think of obesity as a state of excess, but it’s really more akin to a state of starvation. If the fat cells are storing too many calories, the brain doesn’t have access to enough to make sure that metabolism runs properly. So the brain makes us hungry in an attempt to solve that problem, and we overeat and feel better temporarily. But if the fat cells continue to take in too many calories, then we get stuck in this never-ending cycle of overeating and weight gain. The problem isn’t that there are too many calories in the fat cells, it’s that there’s too few in the bloodstream, and cutting back on calories can’t work…

7 simple tips for a healthier diet-Tip #6-Bake, Roast and Grill Instead of Frying