These Fruits and Vegetables Are Linked to Weight Loss

Not only are they healthy but they are often delicious as well and I’m obviously talking about red fruits because it so happens that a new study shows once again that: 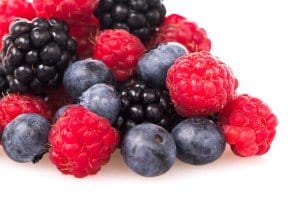 Deep red produce is associated with the most weight loss

It may not feel like news when scientists uncover more evidence that fruits and vegetables are healthy. But Americans seem to need every shred of science to convince them to eat them. Despite reams of research backing up a plant-heavy diet for overall health and for a healthy weight, fewer than one in five adults eat enough of them, according to recent federal data.

In a study published today in The BMJ, researchers found that one little-understood group of compounds—flavonoids—might be partly responsible for the weight-loss power of produce. The researchers looked at up to 24 years’ worth of data from 124,000 people in the U.S. The people in the data set, who were ages 27 to 65, had reported their weight every two years and their diet every four years between 1986 and 2011.

The results revealed a relationship between diets high in flavonoids and less weight gain. The ones that had a biggest impact were anthocyanins, found in dark red foods like blueberries, cherries, grapes and strawberries, and flavonoid polymers, found in tea and apples.

Previously, the researchers had found that some foods, including blueberries, apples, pears, prunes, strawberries, grapes, peppers and celery, were linked to lower weight gain. “We wanted to better understand why those particular fruits and vegetables stuck out,” says Monica Bertoia, research associate at Harvard T.H Chan School of Public Health and lead author on the paper.

Fiber and glycemic load—how much a food raises blood sugar when consumed—didn’t explain the association, so they focused on flavonoids, natural compounds found in fruits and vegetables that seem to have a protective effect on their host plants. Past animal studies have suggested that flavonoids in whole foods might decrease the absorption of fat and may increase calorie expenditure..

Dietary Tips to Whittle Down Your Waist

Physical Exercise to Burn Fat Around Your Midsection

The Danger of Simply Accepting That Spare Tire

Belly Fat Tips for People Over 40

How Poor Sleep Causes You to Gain Weight

How Sleep Affects Your Weight