What Is Testosterone And Its Role In A Man’s Body

Testosterone is a hormone found in much greater amounts than exists in women.

It is made primarily by the testicles and results in the function of many male activities, including:

More men are seeing an endocrinologist or urologist and are concerned about depression, weak muscles, lack of libido, and excessive fatigue, which are all symptoms of low T syndrome. In some cases, it isn’t the testosterone at all and is instead thyroid dysfunction but this can be tested for, too. 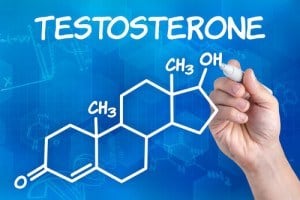 After the age of 30 years, the testosterone level begins to drop. Men confuse this testosterone loss with part of the aging process but this is simply not the case. Men assume that, as they age, libido is supposed to decrease and erectile dysfunction is a normal part of the process. Many of these men have low T syndrome, which can be treated so that their symptoms can improve.

Doctors treating men with testosterone problems must first rule out other causes of their syndrome. Part of the work up of these symptoms includes determining the man’s testosterone level. The normal amount of testosterone in men is 300 ng/dL. The upper limit for testosterone is 800 ng/dL.

Causes of low T syndrome include the following:

Not every man experiences symptoms from having low T syndrome. Levels of 100-200 ng/dL, however, usually these levels do produce symptoms. Low T syndrome, if left untreated, can lead to bone loss and osteoporosis so it should be treated even with few or tolerable symptoms.

Low testosterone should be treated if it is contributing to infertility or if it is causing physical symptoms like erectile dysfunction or osteoporosis. Testosterone does not survive the acidic environment of the stomach so regular pills cannot be given. Instead, testosterone is used in injectable form, as a patch, lozenges, gels, or as a paste that absorbs through the skin. For severe problems, injectable testosterone is considered the most effective. The injections are designed to be given every few weeks.

They stimulate sperm production and improve sperm motility. Gels or patches are used for people with fewer symptoms of low T syndrome. Another treatment involves the use of pellets of testosterone injected into the buttocks. The pellets are able to release a steady amount of testosterone over a period of 3-4 months.

Because of the risks of developing negative effects from taking testosterone, the man with low T syndrome and his doctor should have an honest discussion about the pros and cons of taking the hormone before embarking on treatment.

Do these testosterone supplements really work?

Viagra And Other Erectile Dysfunction Drugs Vary In Effectiveness, Side Effects