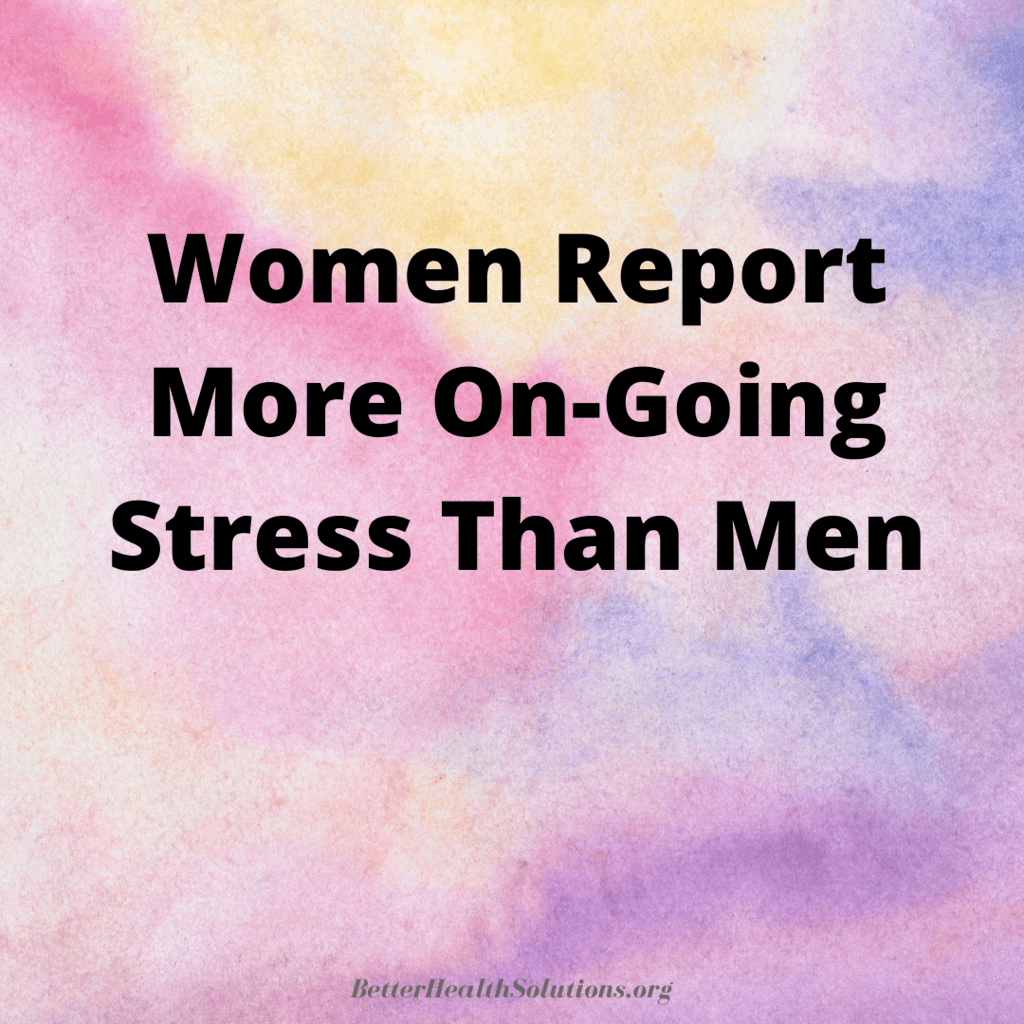 Stress is common in both men and women. However, women are faced with more chronic stress than men. The reason that it’s different has to do with how stress affects the body as well as how the person deals with the stressor.

Hormones play a huge part in the way that stress affects a person and women have a stronger response to the stress hormone than men do. Due to the hormonal makeup of women, they’re less likely to handle the influx without it affecting them.

Because stress causes both a physical and an emotional response, this also affects women differently. Plus, women juggle different aspects of life than men do. When there’s chronic stress in a woman’s life, she’s more likely to experience a high level of symptoms.

These symptoms can be ones such as gastrointestinal issues. Women are more likely to suffer from insomnia than men are when faced with ongoing stress. Women are also more likely to have changes in the way that they eat than a man does.

Many report a loss of appetite. The stress also takes a toll in the form of a complete mental and physical exhaustion in women more so than in men. The reason that stress affects women twice as much as it does men also has to do with the amount of pressure and the workload that some women face.

Many women hold full time jobs in or out of the home. They care for children as well as a spouse or significant other. Studies have shown more women than men carry a responsibility for another family member, such as a grandparent or parent.

In an effort to juggle all of their responsibilities, women develop chronic stress due to an attempt to handle too many issues at once. This stress can often develop as a result skipping healthy activities in order to try to gain some free time in their overloaded lives.

Some women will start to limit their sleep and as a result don’t get enough rest. Others will skip out on relaxation events, such as taking a day off or getting together with friends.

The ongoing stress faced by women can come from some of the same areas where a man also deals with stress. For example, some women tend to do more at work as far as responsibilities.

They’ll often step in to handle something for a coworker or accept a heavier workload without speaking up for themselves. They may work longer hours at the office. It’s not uncommon for many women who report stress to have the habit of working well over 40 hours a week to try to get ahead.

Even when accepting more work or more responsibilities, women have a harder time letting go or rearranging priorities to take care of their own needs over those they care about. So this causes the stress to continue to build until it begins to show up in physical aches and other health issues.

How Long Term Stress Creates Harmful Inflammation in Your Body

Chronic Stress Can Be Brought on By Other Health Issues

How the Global Pandemic Has Created a Chronic Stress Crisis

When You’re Stressed for Too Long, Your Immune System Suffers

Your Body Continually Tries to Recover from Stress

What to Do When People Are Your Primary Source of Stress

Can Stress Cause Digestive Issues?

Stress Can Cause Obesity to Spiral Out of Control